Have the terrorists won?

Last night, I was surprised to see former New York Mayor Ed Koch, a liberal Democrat, at the Republican convention, giving George Bush his wholehearted endorsement.  Koch readily acknowledged that he disagreed with Bush and the Republicans on virtually all domestic issues - abortion, health care, education, the courts, the environment, to name a few.

Why then, you might be asking, would Koch endorse Bush's reelection?  "Simple," Koch said.  "The war against terrorism trumps everything."

If Dick Cheney and Carl Rove had the foresight to realize that a terrorist attack was all it took to get this country to give license to the ultra-right to enact their agenda, who knows what sacrifices they might have had this nation endure (after all, the end does justify the means).

If the terrorists can get us to abandon virtually all of our principled positions, they have won.

"It's now almost certain that terrorists brought down those two RussianIn 2000, after bowing out of the Republican presidential nomination race, McCain said that he regretted not having taken a stance against South Carolina’s flying the confederate flag over the state capitol.McCain said he regretted that he honored politics over principle.

In 2004, Republican Senator John McCain, has criticized an anti-Kerry advertisement by a group of veterans as being "dishonest and dishonorable”.

When asked whether the White House was behind the anti-Kerry ad, McCain said, "I hope not, but I don't know.  But I think the White House should specifically condemn the ad."  Bush has refused to do so.  McCain called on Kerry to condemn an attack ad on Bush’s military service.  Kerry did so.

"The first lady raises a valid point. Since it would take years for stem cell research to find a cure for Alzheimer's, why start? It makes no sense. If you can only save people eventually, you're really doing a disservice." 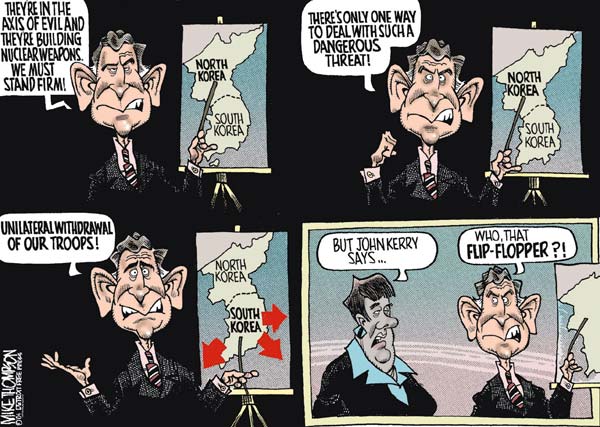 On Monday, in a speech before the VFW convention, Bush announced that some 70,000 troops stationed in important ally nations - most notably Germany and South Korea - will be redeployed back to the United States and will be replaced with a much smaller, more tactical, force.  Bush explained that he wanted troops to have more "family time".  While there may be sound reasons to reshape the deployment of our troops based on the evolution of the worldwide threats to peace, does anybody really think that a political speech less than three months before the election is the way to lead, to bring our allies along in support of this decision, indeed, to instill confidence throughout the world that the U.S. makes important decisions with international impact on something more than political expediency?

"The President and Mrs. Bush were on 'Larry King' last night and the president said, 'America is absolutely better off today than it was 4 years ago.' Then he said, 'Did I say America, I meant Chevron.'"

"The president finally explained why he sat in that classroom on 9/11 for 7 minutes after he was told the country was under attack. He said he was 'collecting his thoughts.' What a time to start a new hobby.'"

"Cheney also warned Americans about a group that is trying to impose their radical extremism on everyone else. He said they have no tolerance for democracy and no tolerance for people with a different religious faith. Then he said, 'Oh I'm sorry that's our platform.'" 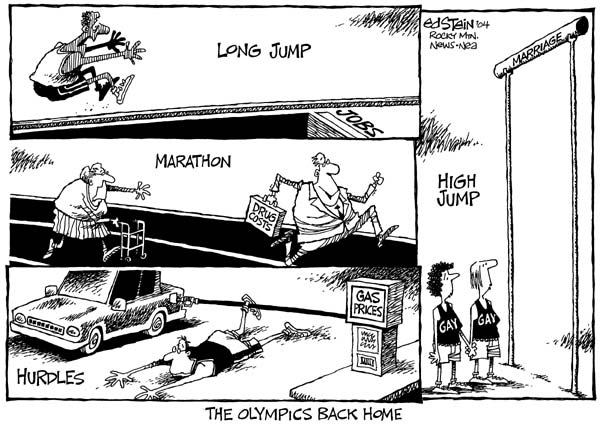 "Is it me or is Bush going everywhere Kerry goes? So far in the past week, President Bush has followed John Kerry to Davenport, Iowa; New Mexico; Las Vegas; Los Angeles; and he follows him to Portland, Oregon. The only place he never followed John Kerry was Vietnam."

"President Bush said yesterday it doesn't make any sense to raise taxes on the rich because rich people can figure out how to dodge taxes. Then Dick Cheney said 'Shut up! You're ruining everything.'"

Jay Leno:  "President Bush said the other side, meaning Kerry and Edwards, just 'talks a good game.'  Well, at least nobody can accuse Bush of that."

"Republicans are now trying to energize their Amish vote.  Dick Cheney is really pandering to the Amish. Today he told a senator to go f--- thyself."

"In Davenport, Iowa, while President Bush and John Kerry were giving speeches they had three banks robberies. You know you let Washington politicians in your town and you're going to attract the wrong element. ... Luckily both Bush and Kerry have been eliminated as suspects. Because of his wife Kerry doesn't need the money and, come on, nobody believes Bush is smart enough to pull off this kind of job."

"John Kerry and John Edwards recently published their political promises and strategies in a book. You see that's smart putting all their ideas in a book. This way they're certain to keep them secret from Bush."

"Bush and Kerry tried to plan their schedules so they're not in the same place at the same time. A tradition they started during Vietnam."

"Bush spent all morning reading the latest security briefing even though it took time away from ignoring the middle class."

"After a long investigation the SEC has fined Halliburton $7.5 million for issuing fraudulent statements exaggerating their profits in 1998 and 1999 during which their CEO was — oh who was it? Oh that's right. ... Cheney himself has not been implicated in the scandal and according to Cheney's lawyer there is no allegation whatsoever that he acted in any way other than in the best interests of the company and its shareholders. And you know what? It's still true today."

Republican Senator John McCain, has criticized an anti-Kerry advertisement by a group of veterans as being "dishonest and dishonorable".  The advertisement shows a number of Vietnam veterans accusing John Kerry of lying about his war record.

Spokesman John O'Neill, who's been attacking Kerry since 1971, was quoted on a right-wing Web site as saying the real point wasn't the story of Kerry's medals but his opposition to the war when he returned home, when he "grossly and knowingly distorted the conduct of the American soldiers, marines, sailors and airmen of that war" by saying American troops had committed war crimes.  On the other hand, Gen. Tommy Franks recently said about Kerry's 1971 comments, "He was a young officer over there, and I'm not sure that -- that activities like that didn't take place. In fact, quite the contrary. I'm sure that they did take place."

"Do you think Senator Kerry is qualified to be commander-in-chief?"

Word of the day... MALAPROPISM

Bush and the 9-11 Commission recommendations...

Bush is trying to give the nation the impression he is moving quickly to implement the strong bi-partisan recommendations of the 9-11 Commission.  In fact, he is only paying lip service to the recommendations.  Bush announced that he would support the establishment of a National Intelligence Director, BUT Bush's intelligence czar would have no budget authority, no authority to hire or fire, and would serve at the whim of the president.  In other words, he would be a eunuch (the czar could be a czaress but the eunuch metaphor is a problem).

The political problem for Bush is that the nation is not fooled and too many Republicans are either too patriotic or too politically pragmatic to follow the leader of their party.

·         9-11 Commission member John Lehman, a Republican, was blunt: "Our recommendations are not a Chinese menu. I would strongly recommend that these be viewed as a whole, that the powers needed to carry out these recommendations be enacted as a whole package."

·         Former Republican Sen. Slade Gorton (R-WA), a member of the Commission, agreed: ''No one is going to listen to this individual'' absent his or her ability to hire and fire and control budgets.

·         Sen. Arlen Specter (R-PA) said: "We ought to take the bull by the horns, create this new national director . . . and really provide some authority, including budget authority. If you don't have the authority to pick the people, isn't a national director just a shell game and a shell operation?"

·         Sen. Richard Shelby (R-AL), a former chairman of the Senate Select Committee on Intelligence, agreed, charging the new director must be "someone with total control and accountability. That's the budget too." 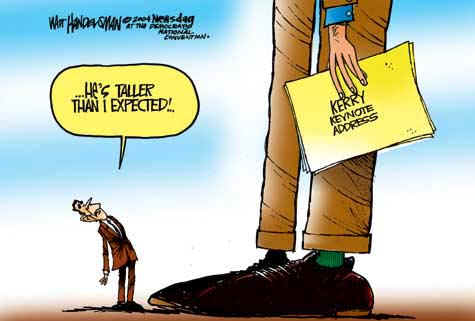 The Republican platform on which George W. Bush ran in 2000 called reducing the national debt "a sound policy goal and a moral imperative."  Bill Clinton had eliminated the budget deficit, going from a $290 billion shortfall in 1992 to a $236 billion surplus in 2000, the year before Mr. Bush took office.

Yesterday, the White House forecast a whopping $445 billion budgetary deficit this year, nearly 30 per cent more than last year’s shortfall.  The Labor Department also announced yesterday that from the start of 2001 to the end of 2003, over 11.4 million workers were displaced from jobs, 5.3 million of them from jobs they had held for three years or more.  The Commerce Department announced that economic growth figures had slowed down to an annual rate of 3 per cent.  IRS data show that under President Bush "the overall income individual Americans reported to the government shrank for two consecutive years" – the first time that has happened since the modern tax system was introduced during World War II.

However, not all the economic news is grim!  ConocoPhillips said second-quarter profits surged nearly 75%, to $2.1 billion.  Shell saw its earnings rise 54%, an additional $3.7 billion in profits.  British Petroleum posted record-setting second quarter profits of $3.9 billion – a 23 percent jump from just one year ago.  And ExxonMobil posted second-quarter profit growth of 39 percent to $5.79 billion, its highest quarterly profit ever.

"The principle of spending money to be paid by posterity is but swindling on a large scale."
- Thomas Jefferson.