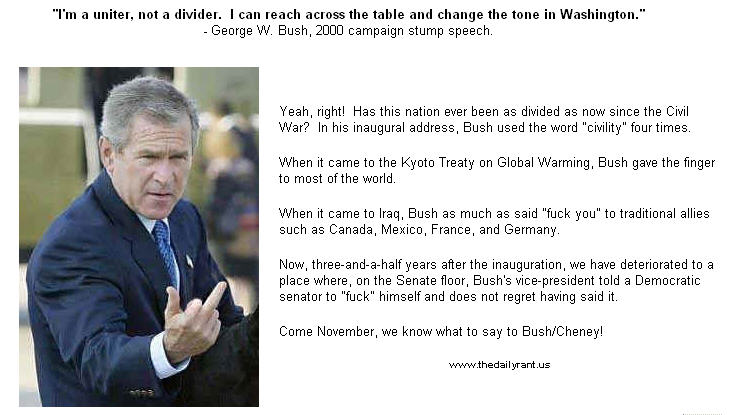 Jay Leno:  "On the Senate floor, Dick Cheney flipped out and told Senator Pat Leahy to go f-himself. Can you believe that? Aren't these the same guys trying to fine Howard Stern for bad language?" Jimmy Kimmel:  "Only 12 days until we hand Iraq back over to the Iraqis. I don't think we're getting our security deposit back."

Jay Leno:  "The 9/11 commission said they found no working relationship between al Qaeda and Saddam Hussein. It's kind of like the FBI and the CIA."

Jay Leno:  "Clinton said he had the affair with Monica Lewinsky because he could. Ironically, that's the same reason President Bush gave for invading Iraq."

"The Bush administration is testing something called the Registered Travelers Program. This allows travelers to bypass the security lines and checkpoints at airports by agreeing to a fee and a background check. Boy, that's a great idea. A separate line for rich people — I'm surprised the Republicans thought of that."

On Father's Day, Ron Reagan on his father... The John Kerry TV ad I want to see this week... 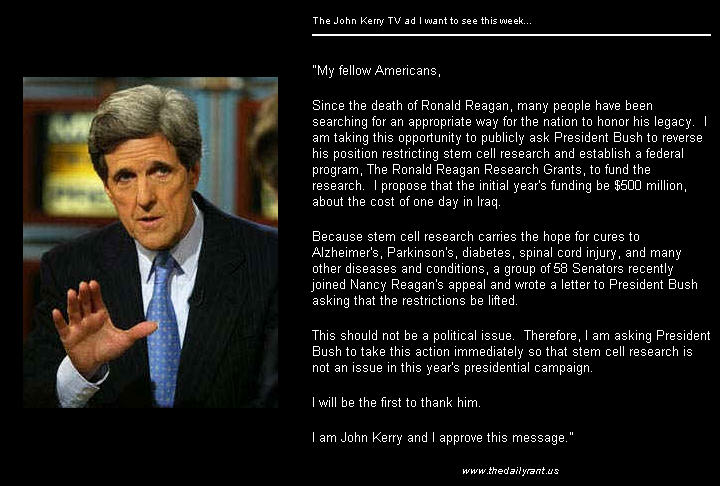 NEWS FLASH:  In response to demand, the funeral of Ronald Reagan will continue until Labor Day
or until every conservative in the country has invoked the name of Reagan on national TV, whichever is last.

NEWS FLASH:  The Reagan Legacy Project has introduced a bill to change the name of the nation's capital to Reagan, D.C.

We lost a treasure yesterday.

I was fortunate enough to have seen Ray Charles perform twice.  I know of no performer who had a more palpable connection with his audience.

One of my favorite Ray Charles songs is In The Heat Of The Night, the title song for the 1967 movie.  The last verse of the song is:

I've got trouble wall to wall
Oh yes I have
I repeat in the night
Must be an ending to us all
Oh Lord, it won't be long
Yes, just you be strong
And it'll be all right
In the heat of the night.

Tom Selleck:  "This week, if you can't say that Reagan was a great president, at least say that he was a good man."

David Letterman:  "Prosecutors are having a difficult time building a case against Saddam Hussein. I'll tell you something, the guy is smart. See, when he tortured people, he didn't take snapshots."

"President Bush met with the Pope in Rome. Did you see the picture of the two of them? Man, that poor guy, he has a blank look on his face like he doesn't know where he is. Then, the Pope told him, just be quiet and relax."

Jay Leno:  "President Bush has returned after remembering D-Day. Or, as it was known in his house, report card day." The fact that the Bush administration has put Laura Bush, a very popular first lady, out front on this issue signals that Bush will not change his rigid restrictions on stem cell research even in the wake of Nancy Reagan's plea and strong Congressional support for a change.

Why?  Bush wants to be sure that the religious right is strongly in his camp for the election.  It isn't that he fears that they will vote for Kerry or Nader.  Bush needs their solidarity, their sense that Bush's reelection is a moral imperative.  If he softens on this issue, so too will their support.

The Monday Quiz
Win a free subscription to The Daily Rant!

As a liberal, I hope Ronald Reagan's greatest legacy is yet to be realized.  On May 8, Nancy Reagan, speaking at a benefit to aid stem cell research, said:

"Science has presented us with a hope called stem cell research, which may provide our scientists with many answers that for so long have been beyond our grasp," she said. "I just don't see how we can turn our backs on this."

"Ronnie's long journey has finally taken him to a distant place, where I can no longer reach him," she said. "We've lost so much time already, and I just really can't bear to lose any more."

May she be motivated to and find comfort by being heard on this important issue in the future. 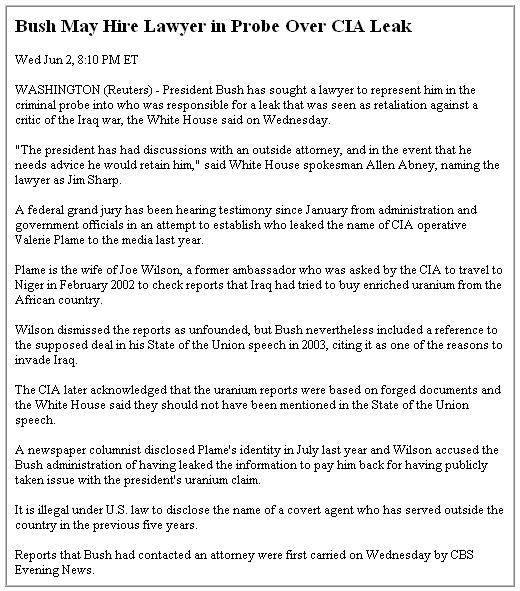 I have been struggling to figure out why sometimes Kerry connects so well and other times, well...

Jay Leno:  "John Kerry has a new 757 jet to use while he campaigns for president. In the event that Kerry starts speaking, oxygen masks fall from the ceiling to keep people awake."

He was great talking to Tim Russert for almost an hour on Meet the Press a couple of months ago.  But, most of our Kerry sound bites come from his stump speeches and, in those, he is feeding the comedians with material...

Jon Stewart:  "Please explain to me why John Kerry sounds more dickish telling the truth than Bush sounds when he's lying. How is that possible?"

Get it?  Kerry needs to talk, not orate.  When he is talking, he is good.  When he is orating, well, he gets into this lyrical, sing-song, rhythm which is annoying, at best.

I assume Kerry has some high-paid media and image consultants.  Why haven't they seen the problem and fixed it?  It has been written that Gore wouldn't listen to the "experts" he was paying.  I hope Kerry doesn't have the same problem.  After all, if Bush could learn to deliver a speech, well, you know...

I do think my analysis bodes well for the debates when Kerry will be talking.  That will be an opportunity for him to think on his feet and articulate.  The contrast with Bush should be striking.