A Non-political Rant...
(Bob, who says I don't take requests?)

Dogster (www.dogster.com, for those of you who have been spared this latest craze).  Dogster declares that every dog should have a home page.  It was suggested to me that Dogster is intended to be a spoof on Friendster, an online site for people to network with one another.  If that's the general idea, Dogster is a flop on that level.  It's not funny.

If, as I suspect, people are serious about sharing their dogs' likes, dislikes, pals, etc., I have this to say: "Get a life or, at least, keep me off the distribution list for your pooch's place."

I have no problem with people who love their pets and consider them to be people. Hey, I'm crazy about my son's puppy but I hope not to see her on Dogster.  Like intimate baby talk, the personification of four-legged family members should be kept within the family. is a huge part of the problem with our health care system and it is a problem which has nothing to do with trial lawyers.

First, the FDA is to the pharmaceutical industry as the UN is to George W. Bush.  The drug companies and Bush both feed their "regulators" cooked data and then do whatever they want.

Second, the drug companies are spending billions on consumer advertising.  We, the consumers, are paying for these advertising costs when we purchase prescription drugs or pay our health insurance premiums.  Even worse is the fact that the consumer advertising clearly is designed to get patients to push their doctors to prescribe drugs which may not be necessary or may be more expensive than alternative medications.  Both effects take money from our pockets and put it into the pockets of the drug companies.

Finally, more billions are spent on entertaining physicians to persuade and then reward them for prescribing their drugs.  This payola corrupts the decision-making of doctors whose sole allegiance should be to their patients.

Will these problems be fixed?  Not in the next four years.  If you can't lick em, join em.  Invest in Merck, Phizer, GlaxoSmithKline, etc. 
(back after a two day absence)

Declaring that the Secretary of State is "America's face to the world", Bush nominated Condoleezza Rice to succeed Colin Powell to this powerful position. 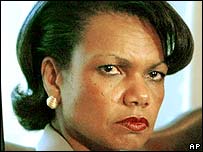 Just in case the world is not already scared of us. A tragic fire on Thursday night destroyed the personal library of President George W. Bush.  Both of his books have been lost.  A presidential spokesman said that the president was devastated, as he had not finished coloring in the second one.

I am in the middle of a two-day visit to New Orleans.  For those of you who are concerned, I am winning my ongoing battle with anorexia. Bush and his cronies are bragging that he was re-elected by the largest plurality in the history of the presidency.  B.F.D.

He also had more voters vote against him than ever in the history of the presidency.

More significantly, after the provisional ballots have been tallied in Ohio, it is clear that Bush was fewer than 100,000 votes in one state from being a one-term president like his father.

Let's not roll over for the next four years. What went wrong?  My thoughts on the subject...

Kerry was not a bad candidate.  He was a much better campaigner than Gore.  However, he did a few dumb things which didn't help.

In yesterday's Rant, I compared Bush to a malignant tumor growing in our country.  If Jeb Bush runs for president in 2008, I'll know I'm right and that the cancer is spreading.  We must be proactive.  What the country needs is a double mastectomy to have these two boobs removed.

Comedian Yakov Smirnoff made famous the line, "What a country!"

I, too, say "What a country!"  However, I say it not in jest but rather with revulsion and dread.  It is mind-boggling and unacceptable to me that a majority of my fellow citizens could vote for a president who has alienated most of our traditional allies in the world, taken us into a war based upon a lie, taken giant steps backward on environmental issues, has appointed judges who advocate putting pictures of Jesus in our courtrooms, has turned a budget surplus into a deficit, and on and on.

A friend recently described me as being apoplectic about the election.  I'm afraid so.  While I remember surviving eight years of Ronald Reagan, as tumors go, Reagan was benign compared to this malignancy which has grown in our country. Check out The Daily Rant prediction below in November 1 Rant.