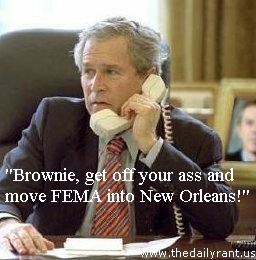 Q: What is George W. Bush's position on Roe vs. Wade?

A: He really doesn't care how people get out of New Orleans. 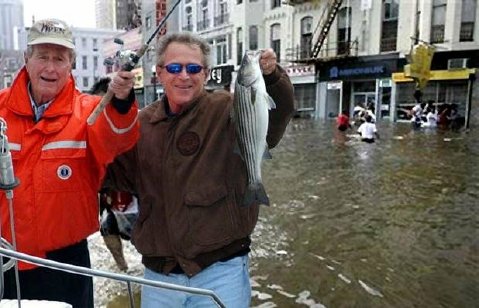 How far does the apple fall?

Barbara Bush, the First Mother and former First lady, has been widely reported as being the strong matriarch of the Bush family, the parent who will get in the face of her children to make sure they understand her point of view.  I suggest that she is also the source of the Bush's conservative Republicanism.

Exhibit A:  Mrs. Bush, after touring the Astrodome complex in Houston on Monday, said:

"What I'm hearing, which is sort of scary, is they all want to stay in Texas.  Everyone is so overwhelmed by the hospitality.  And so many of the people in the arena here, you know, were underprivileged anyway, so this is working very well for them."

The Buck Stops Where?

Thursday, in an interview on ABC's Good Morning America, President Bush stated: "I don't think anyone anticipated the breach of the levees."

Thursday, FEMA Director Michael Brown said, "I think the other thing that really caught me by surprise was the fact that there were so many people, and I'm not laying blame, but either chose not to evacuate or could not evacuate. And as we began to do the evacuations from the Superdome, all of a sudden, literally thousands of other people started showing up in other places, and we were not prepared for that. We were, we were surprised by that."

On Friday, Bush said the response to Katrina was unsatisfactory. Nevertheless, he had nothing but praise for his FEMA director. "Brownie, you're doing a heck of a job," the president said.

Saturday, Homeland Security Secretary Michael Chertoff argued that government planners did not predict such a disaster ever could occur.  Chertoff, fielding questions from reporters, said government officials did not expect both a powerful hurricane and a breach of levees that would flood the city of New Orleans.  "That 'perfect storm' of a combination of catastrophes exceeded the foresight of the planners, and maybe anybody's foresight," Chertoff said.  He called the disaster "breathtaking in its surprise."

Yesterday, Bush, in announcing that he would head up an investigation into the federal response to Katrina, stated, "So, I'm going to find out, over time, what went right and what went wrong."

So, where do you think the buck will stop when Bush concludes his "investigation"?  Will Bush be Trumanesque and accept responsibility or will lesser heads roll?

My bet is that FEMA Director Michael Brown who, prior to going to FEMA as a Bush political appointee, was fired by the International Arabian Horse Association because of his incompetence, will fall on his sword and resign, protecting Bush who doesn't like to fire his cronies.

"Hurricane Katrina has been particularly hard on President Bush, who was forced to end his vacation two days early. He was supposed to be clearing brush in Texas until Friday. Now he's going to get back to the White House tomorrow. You know, if he doesn't use his vacation days, he loses them, so this is hard on everybody."

There is so much to say, too much.

Katrina took Miami by surprise last Thursday night.  We were expecting only a rain event and we were surprised with a serious wind event which knocked out power for 750,000 people and topples thousands of mature trees.  My home lost power and, on Friday, we escaped the heat, made our way to Fort Lauderdale, and took a previously scheduled trip to New Orleans to visit our son for the weekend.  I'll spare you the details except to say that we made it out of New Orleans by leaving in our rental car at 3 AM on Sunday morning and driving back to Miami.  Our son, his girlfriend, and their puppy left New Orleans on Sunday for her family home in northern Mississippi which, as it turned out, had a tree fall on the roof when Katrina arrived there on Monday evening.

Enough of my family's encounters with Katrina.  I want to rant about our president.  I was prepared to cut him some slack - after all, he did cut his vacation short by two days.  And I'm sure that the 1700 foot flyby by Air Force One on Wednesday gave a lot of comfort to the people waving towels on their roofs in New Orleans.  But then I saw the following article: